Geneva, Switzerland, 3 November 2021 – As consumers across the world have adapted behaviours during the COVID-19 pandemic, they have become less concerned by the environmental impact of their choices regarding the products and services they buy or use.

This is one of the key findings of a survey launched today by the World Economic Forum and Ipsos, which was carried out across 29 countries between September and October 2021.

Fall in numbers modifying behaviour
On average, over half (56%) of the 23,055 adults interviewed said they have modified their consumer behaviour out of concern about climate change over the past few years. This is down from an average of 69% in January 2020, when an identical question was asked in all but two of the same 29 countries.

Even in countries where consumers are still relatively likely to report having adapted their behaviour to counteract climate change, the proportion of environmentally conscious consumers seems to have fallen significantly since the last survey. They include India (76%, down 12 percentage points), Mexico (74%, -12pts), Chile (73%, -13pts) and China (72%, -13pts). 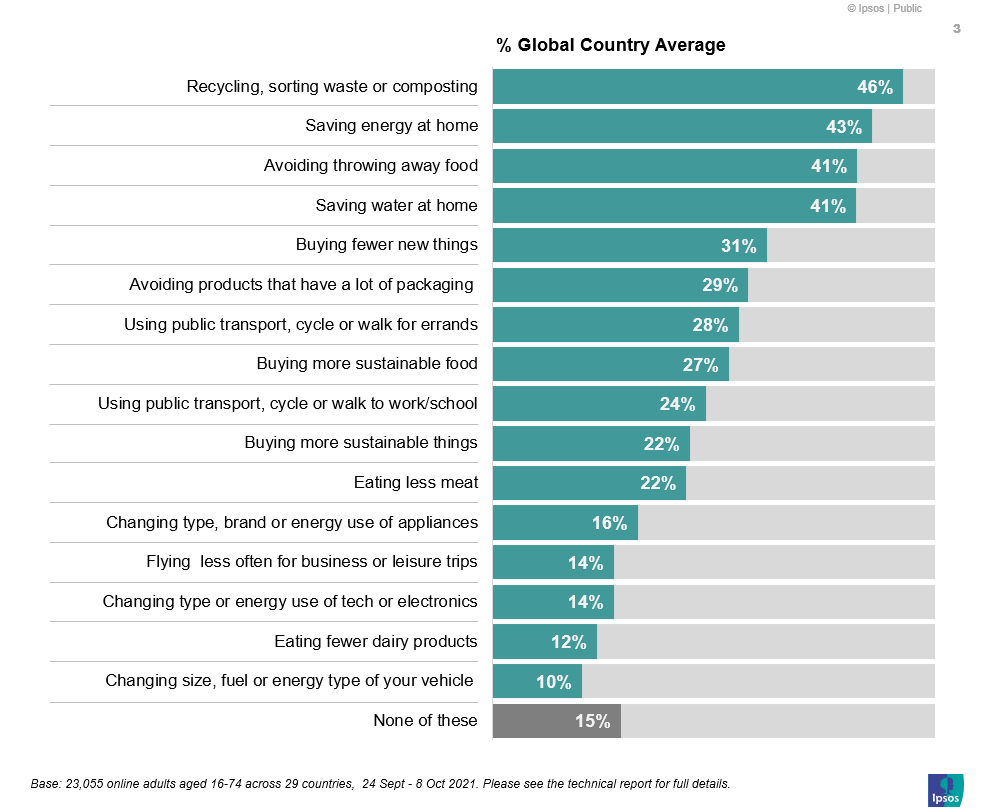 Women are generally more likely than men to report changing their behaviour because of climate concerns, especially in terms of avoiding throwing away food (46% vs 36%, respectively on average across all countries), saving water at home (46% vs 36%), buying fewer new things (36% vs 26%) and avoiding products that have a lot of packaging (33% vs 25%).

The results suggest that Latin American and Hungarian consumers tend to think others are considerably less engaged than they are. In most other countries, large proportions indicated they were unsure about their neighbours’ habits.

About the survey
The survey was conducted by Ipsos on its Global Advisor online platform between 24 September and 8 October 2021. Ipsos quizzed a total of 23,055 adults aged 18-74 in the US, Canada, Malaysia, South Africa and Turkey, and aged 16-74 in the 24 other markets.

About Ipsos
Ipsos is the world’s third-largest market research company, with a presence in 90 markets and employing more than 18,000 people. It serves more than 5,000 clients across the world with 75 business solutions. Founded in France in 1975, Ipsos is listed on the Euronext Paris since 1 July 1999.

Contract for the construction of the first line of Bogota’s Metro...

Why the UK will stay in the EU even when it...